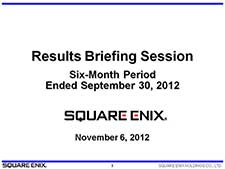 Today's session will start with a presentation on the financial results of the First Six-Month Period by Yosuke Matsuda, Director and Chief Financial Officer, followed by a presentation by Yoichi Wada, President and Representative Director. 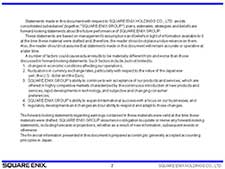 Please refer to Page 5 for the consolidated profit and loss statement.
We report no particular entries under non-operating income and expenses and extraordinary gain and loss for the First Six-Month Period, however, assets in foreign currencies suffered ¥1,025 million in foreign exchange loss. Adding this to the operating loss, we report ¥6,266 million in ordinary loss.

Please refer to page 3 for the consolidated balance sheet.
Under the Assets, content production account increased more than ¥1,000 million to ¥26.4 billion, which is within the range of normal fluctuations. Property and equipment under non-current assets increased approximately ¥4 billion for equipment attached to buildings that were associated with our recent office relocation.

Cash and deposits were ¥95,136 million, a decrease from the balance as of March 31, 2012 due to tax and dividend payouts.
There are no major variables in liabilities, as seen on page 4.
Asset retirement obligations (accounted into non-current liabilities) increased at approximately ¥650 million in relation to our recent relocation.

12345678910
The plans, forecasts, strategies and ideas described in this material are descriptions of forecasts of future results. These descriptions rely on information available as of the date of production of this material and are based on assumptions and judgment made by the Company’s management. Readers are advised not to rely solely on these forecasts. Readers should also not assume that these forecasts are accurate or valid information, even after the date of public release. There are many factors that may cause actual results to vary considerably from the forecasts, and in some cases actual results may be inferior to forecasts.
The information on the future forecasts described in this material is current as of November 6, 2012. The company is not obliged to update or correct forecasts concerning the Company’s future results, including forecasts or outlook, if new information becomes available and/or events occur after November 6, 2012.
laoding...