Now let me discuss the Digital Entertainment segment. This segment is divided broadly into three categories; HD games, MMO (Massively-Multiplayer Online) games, and social gaming and others (“SG”) for internal management purposes. While HD games turned in disappointing results, MMO games are highlighted by two major titles; “DRAGON QUEST X: Mezameshi Itsutsu no Shuzoku Online” (Rise of the Five Tribes Online) (“DQX”) and “FINAL FANTASY XIV: A REALM REBORN” (“FFXIV”). DQX has been operating steadily since its launch of service in August 2012. The development of FFXIV, another major pillar in this category, has been smoothly progressing toward the goal of its August 2013 launch.

In the SG category, existing titles are continuously contributing to the profit of this segment. “Kaku-San-Sei Million Arthur” (Diffusible Million Arthur), an SG title released in April 2012, has been successful not only in the domestic market, but also in Korea, where the game has become an instant hit since its launch in December 2012. In this manner, new titles are expanding satisfactorily. In the fiscal year under review, the SG category’s net sales amounted to ¥22,686 million, which resulted in significant growth in net sales and operating income from the previous fiscal year ended March 2012. We expect further expansion of the SG category as a key growth area.

In the HD games category, we delivered three major titles in the fiscal year under review, primarily in Europe and North America. These titles—“SLEEPING DOGS,” “Hitman: Absolution,” and “TOMB RAIDER”—failed to reach their respective targets, and resulted in financially unsatisfactory consequences, whereas the HD business in Japan remained strong through sales of the Nintendo 3DS version of “DRAGON QUEST VII: Eden no Senshitachi” (Warriors of Eden) and others.

These three titles, which were developed for consumer game consoles, were critically-acclaimed through media coverage, and therefore, I believe, were successful from a game development perspective. However, we were exposed to increasingly severe competition with a number of blockbuster titles from major publishers, and experienced great difficulties in price control of these titles from a marketing perspective. We had to expend considerable incentive programs offered to retailers such as price protection, back-end rebates, and promotional cooperation costs, which generated a certain level of shipment quantity but with lower margins than expected. As a result, provision for sales returns increased considerably year on year, reaching ¥3,927 million, and was a major factor in the deterioration of profits.

We do not recognize this situation as a temporary phenomenon that can be dealt with merely by restrengthening the distribution system, but as a structural problem in the HD business. That is to say, the financial results posted in the fiscal year under review reflect an intrinsic problem within the HD game business model that has come to the surface. 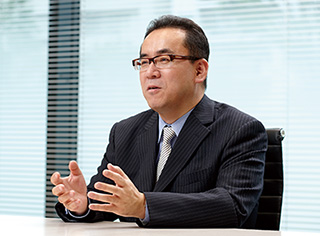 The basic business model of the HD games category is to distribute disc media on which a game is recorded. Many games for consumer game consoles are still provided on discs, whereas download distribution using no record media is becoming the mainstream for PC games and additional content available after a title is released. In the case of the disc-based distribution model, sales are determined by multiplying the unit price by the number of discs sold. An increase in shipments or unit price will naturally drive sales higher. However, supplying games to distribution channels has become much more difficult in the video game market due to an increase in the number of titles, in particular, blockbuster titles competing with each other. As retailers become more selective about titles to purchase, game publishers have to deal with more expenses associated with pricing policy, such as back-end rebates, advertising, and price protection, in order to expand the number of units shipped. As a result, street prices are substantially declining, which leads to a situation where profits remain sluggish even though the number of units shipped increases.

This business model is also having a critical impact on game development. Under the model of selling packaged games, the timing by which we may offer a game to customers is limited to the release of the product. Profit opportunities are almost non-existent during the game development phase. Although we are making on-site efforts to streamline our game development processes through the use of utility game engines and other approaches, HD games development requires increasingly longer time periods as the performance of game consoles improves.

From a financial point of view, investment in game development is being capitalized on the balance sheet over a significant time frame, and investment recovery risk increases. In other words, the investment turnover is low. In consequence, the financial results of the fiscal year under review were very unsatisfactory, being compounded by the sizable drop in street prices at the point of sale. I believe the problem is not a one-time event but a structural issue within the HD games category.

How to address the issue is a major task for the executive team. As noted above, the HD games category faces the structural issues of an inflexible earnings model and long-term, large-scale development resulting in a low rate of investment turnover. These two factors are closely interconnected. First, we have to create earnings opportunities even before a product is released in order to raise investment turnover of a long-term, large-scale development project. Titles of large-scale development are our flagship titles, showcasing our technologies. We will never lower the flag of such titles. In fact, they are strong brands and therefore have the potential of diverse content exploitation. It is possible to establish a business model that delivers content in various formats to customers even before the launch of a game. Through implementation of such a development process, we will promote approaches to raise investment turnover by accelerating earnings opportunities and reducing financial risks. These approaches should not be discussed in the context of financial consequences. A lack of earnings opportunities over a long period of time means, essentially, having no contact with customers during the same period. In these days, it is becoming crucial to strengthen customer relations. Re-examining our approach to long-term, large-scale development is also a step toward building a better customer relationship.