2016 is being referred to as “year zero” for VR as VR machines, peripherals, and content are finally making their way to the market in significant volumes. Our Group is also extremely interested in this domain and already working on developing VR content for some of our projects. That said, consumers cannot grasp the appeal of VR without having experienced it, so the spread of VR is currently being driven by supply-side entities such as hardware manufacturers and game developers. While equipment and other purchases currently demand a significant upfront investment on the part of users, VR offers never-before-experienced surprises and the possibility for a variety of applications that extend beyond the world of gaming. We therefore look for VR to grow into a major market. Effectively leveraging VR and AR will enrich our Group’s content portfolio, and we also plan to develop unique VR and AR content. We provide content in a wide range of formats, including not only consumer game consoles and smart devices but also amusement machines, publications, and even tangible objects like figurines. We look forward to our creators applying their talents to generate new chemical reactions by combining new VR and AR technologies with such content. We note also that VR and AR are catchall terms for technologies that can take on a variety of forms, and we believe that our Group should offer content that leverages our unique strengths. In our view, gamers are likely to come to expect a “VR mode” as a standard feature on HD game consoles. Incorporating VR content into HD games enables us to create a more immersive gaming experience. We believe this represents the very domain that will enable us to further demonstrate our Group’s strengths. AI (artificial intelligence) is another field undergoing significant innovation. We intend to leverage our advanced research in the realm of gaming AI and believe that gaming AI technology we have developed in entertainment contexts will likely be applied in fields such as the development of robots. We feel certain that once robots expand from the B2B realm to the B2C realm, consumers will expect their robots to be entertaining. Our gaming AI technology and insights may help in that realm. We intend to look for ways to become involved in robot AI technology from the perspective of entertainment.

We have cited expansion into emerging markets as a target for the past several years, but unfortunately have not produced sufficient results. During that time, emerging markets have continued their steady growth, and it goes without saying that taking advantage of the growth in those markets needs to be a key focus under our Group’s growth strategy. China is a leading country in terms of gaming and online and mobile gaming, in particular. As such, it is a key market on a par with those of Japan and the West. We believe that partnerships with local companies will prove effective in developing our content business there and intend to continue to collaborate with key players. 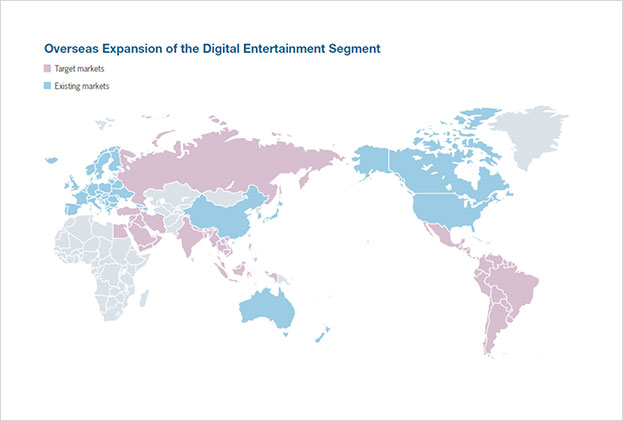 The Middle East and Latin America (especially Mexico and Brazil) are growing rapidly as consumer markets. Language localization is critical to supplying our games to these countries. To date, our localization efforts have focused primarily on the so-called EFIGS languages (English, French, Italian, German and Spanish). However, to improve access to our games for large populations, we believe that we also need to localize into Chinese (simplified), Arabic and Portuguese. Our Western studios have produced multilingual offerings for some time, but we believe that our Japanese studios urgently need to develop the capacity to localize into these major languages at any given time and are working to ensure that at the moment. We also believe that by localizing our globally strategic titles, we should be able to enhance our presence in the relevant regions, thus laying the groundwork for our emerging markets strategy. This is how our businesses performed in the fiscal year ended March 2016 and what we expect for the fiscal year ending March 2017 and beyond. In the fiscal year ended March 2016, our net sales exceeded ¥200 billion for the first time, and we set a new record at the profit attributable to owners of parent line as well. By implementing the aforementioned initiatives, we intend to strive for further growth in our sales and profits. Dividends will serve as the centerpiece of our shareholder return policy, and we will target a consolidated payout ratio of 30% while giving consideration to the appropriate balance between investing and distributing our profits. From VR through AR to AI, we are seeing a constant stream of new investment and business opportunities. We believe that such opportunities should not be missed and that investments in future growth should be made in a timely fashion. We look forward to your continued support.