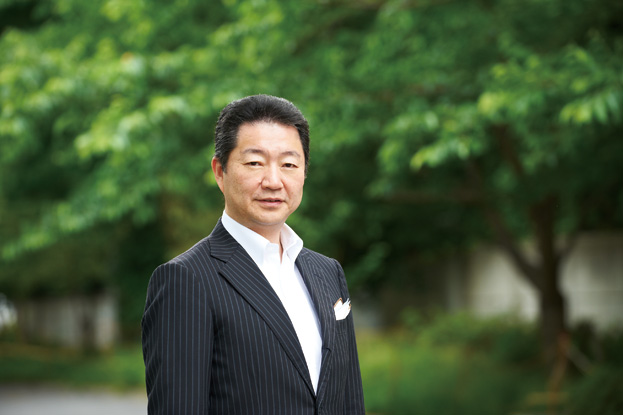 I am grateful to our shareholders for the opportunity to present the Company’s annual report for the fiscal year ended March 31,2012.

In our dividend policy, we are mindful of the balance between being performance-based and providing stable returns. In being performance-based, we aim for a payout ratio of 30%. At the same time, we advocate stable returns. Hence, we paid out dividends of 30 yen per share in the fiscal year ended March 31, 2011, despite a net loss. We will pay dividends this fiscal year as in previous years, and if we back calculate from the actual payout ratio, earnings per share should be higher than 100 yen.
We achieved a genuine recovery from the last fiscal year to this fiscal year, but I realize that we have only completed half of our objective.

I’ll now review results by individual business segments.
Please take a look at the change in our operating income bysegments (Figure 1).
Compared to the prior fiscal year, the following segments saw an increase: Digital Entertainment (1,319 million yen), Amusement (374 million yen) and Merchandising (62 million yen).
saw an increase: Digital Entertainment (1,319 million yen), Amusement (374 million yen) and Merchandising (62 million yen). The Digital Entertainment segment increased in profits, but the structure of the business has changed more than the numbers. I will elaborate on this point later.
Sales in the Amusement segment are flat but generated more profits. The arcade business is getting out of its slump, and we see the fruit of ongoing efforts to reduce fixed costs. That said, profit contributions by arcade game machines were limited this fiscal year whereas next fiscal year will see the release of major, new arcade titles. While many operators have withdrawn from this segment, we can expect to enjoy the profit of the remaining player since the contraction of the market is limited. Although this could hardly be described as a fastgrowing sector, I will ensure that it brings stable profit contributions alongside its primary entertainment objective: producing live experiences that cannot be recreated at home.
The Publication segment peaked in the fiscal year ended March 31, 2010, and profits have steadily decreased since then. We saw huge success with “FULLMETAL ALCHEMIST,” followed by hit titles every year such as “Black Butler” and “SOUL EATER.” In this fiscal year we were able to produce quality, popular titles on a regular basis, such as “Inu Boku Secret Service.” However, an increase in the number of serial publications and a focus on the production of animated series created a rise in fixed costs, which leads to this segment’s downtrend in profit margins. That said, a more fundamental issue of profitability within this segment is not rising expenses, but rather revenue opportunities being limited to the domestic comics market. Once we establish capabilities to produce a string of hits, I am confident we can overcome the status quo by entering overseas markets and online businesses, though this will take some time.