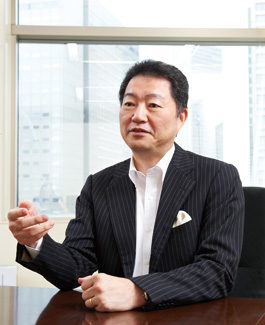 SN games refer to those with designs that allow customers to have fun by connecting with each other, in other words, those developed with social elements at their base. At this point, we provide such games for feature phones, smartphones, and browsers. Non-social games provided on these platforms are also included in this category. This is because these games are developed by the same teams. While MMO games are supporting the Company as the rock providing stable source of income, the SN game teams’ mission is to increase the upside of our income as much as possible.
This area is a frontier for both the expansion of the user base and the evolution of the business model. In order to create solid ground in such an uncertain area we need to accumulate a dense amount of experience in a short period of time. I believe that we should not place big bets in a specific area or consolidate operations merely for the sake of better efficiency. We have intentionally broken up the organization into about ten teams.
This method aims to shorten the cycle of “trial and error,” while accumulating a variety of experiences at fast-pace across our group companies by having small teams run side by side.
This fiscal year we saw a lot of progress. “SENGOKU IXA,” a browser game launched in the prior fiscal year, has achieved over 3 billion yen in profits and has become one of the pillar products of the Company. In addition, “FINAL FANTASY BRIGADE,” a feature phone and smartphone game launched earlier this calendar year had one million registered users within one month of launch, and by March had surpassed two million. “FINAL FANTASY BRIGADE” is already one of the pillar titles of the fiscal year ending March 31, 2013. We are planning to expand the service area into Asia, North America, and Europe, where we can expect further growth. Incidentally, the above-mentioned games have F2P (Free To Play) business models. After experiencing several successes, our ability to analyze KPIs (Key Performance Indicators) related to such games has been improving. When a company has several successful cases such as the above, often they look to double down on scale and efficiency by organizational consolidation. However, I feel that there is rich knowledge to be gained, and we should continue to be aggressive in accumulating as much experience as possible.
When a project is a success, I urge the team to spin-out and form its own group, rather than merging the teams.

HD games is a coined phrase that mainly refers to console games. This fiscal year we released “DEUS EX: HUMAN REVOLUTION” and “FINAL FANTASY XIII-2” in Japan, North America, and Europe, and saw them perform well. “DEUS EX” in particular was meaningful in that it not only contributed to our income but also made a debut as one of our major IPs.
This area is reportedly declining, but I question such views. It is true that the business framework is no longer working. However, I believe that high-definition content will continue to evolve.
The following three points summarize the traditional business framework in the high-definition area: 1) Distribution: selling packaged products at retail stores, 2) Major devices: game consoles, and 3) Revenue recognition: one-time only disc sales. Conversely, we can solve the problem with HD games by reforming each of the above components. With regard to distribution, we are already seeing evolution occur, even before the other elements. Not only e-commerce, but download sales have become common, and major game titles are frequently equipped with PDLCs (Premium Downloadable Content). While we’ll likely see the ratio between the conventional model and the new one reverse going forward, the inevitable transformation has already taken place. That said, with regard to the devices, there is still a clear line drawn between game consoles and any other device. It is wrong to expect that similar game experiences are achievable on any type of device. We should, however, delineate between which style of gameplay is appropriate for the right device depending on the way in which that device intersects with our lives. If such delineations are drawn accurately, the user base for games will expand further. Lastly, the revenue recognition model has fallen behind the most among these three points. For online services connected to game consoles, the console manufacturers are the publishers.
Unless these manufacturers change their policy and implement necessary features, nothing will change. The business model change has begun partially with PDLC, but even the subscription model is rarely accepted, and manufacturers are still not open to the F2P model. I feel that one of the fundamental causes of the declining trend of the game console market is the delay in implementing new business models. This is regretful. However, if we take another perspective, all it takes is for manufacturers to change their ways of thinking, and change could happen overnight. I am eagerly awaiting this change in policy.
Our strategy in this area is: 1) Modifying our game design on the premise of change in business models, 2) Focusing on, and nurturing 10 strong IPs, since keeping a continuous relationship with consumers is important, and 3) Not compromising on quality. In order to achieve 1), we are actively applying our knowledge from MMO and SN games. In addition to regular sessions for sharing information across our organization, we require individual projects to identify issues related to business models.
Regarding point 2), I have been long mentioning it as one of the pillars of our strategy. I would like to expound on point 3). The reality is that game development has become so costly and complicated that the whole industry is at a loss. It is understandable why game engines took the industry by storm in the 2000s.
We have two strategic options open to us for game development. One option is to take full advantage of open environments, which allow for indie developers to be able to develop games. However, many resulting products will be casual-style games and it is unclear if we could generate significant profits. Thus, in this scenario, we would seek to minimize fixed costs. In other words, we would downsize to a minimum capacity as a company and devote ourselves to licensing out IPs without having internal development staff.
Another option is to exert our efforts to the fullest extent to differentiate ourselves from our competitors. We have chosen the latter path. You may have noticed a similar philosophy expressed earlier in the Amusement and MMO games sections of this message. Given this philosophy, we need to tackle the establishment and evolution of our development environment as a global task. Game engines are of significant relevance. We use both third-party and internally developed engines. We are in the midst of developing the “Luminous Studio” engine, with an eye toward next-generation capabilities. We presented the demo for the first time at the E3 game show in 2012, and the reaction was greater than we had anticipated. We were able to confirm that we are heading in the right direction.

The category I call HD games will eventually cease to be necessary as a classification from both perspectives of business model and devices on which they will run. It is not that the market will shrink. But on the contrary, it means that current console games will transform and further develop. When the above three organizational categories will no longer be necessary and we can propose a new business segment, we will see an end to the industry’s current transition period.