In the fiscal year ended March 2018, the Digital Entertainment Business Segment posted net sales of ¥191.4 billion and operating income of ¥43.4 billion, representing a decline in sales but rise in profits on a year-on-year basis. In the HD (High-Definition) Games sub-segment, we launched "DRAGON QUEST XI: Echoes of an Elusive Age,” the latest installment in the DRAGON QUEST series, in July 2017. We undertook the ambitious task of offering the title on both the PlayStation 4 and the Nintendo 3DS. The title has proven extremely popular with players on both platforms, becoming a major hit with combined sales in excess of three million units. With the launch of Western versions of the title slated for September 2018, we plan to grow the DRAGON QUEST brand globally in the fiscal year ending March 2019. Meanwhile, in the FINAL FANTASY franchise, we launched “FINAL FANTASY XII THE ZODIAC AGE,” a remaster of “FINAL FANTASY XII” for which we have completely updated the graphics and incorporated new elements. The title has met with a great reception from players the world over. Remasters are important because they enable us to bring franchise titles presented with the latest look and feel to customers who have never played earlier titles in a series, thus imbuing our game franchises with renewed vitality. We also believe that even players who have experienced the original will find new surprises and excitement in playing recreations brought to life with the latest technologies. As such, we intend to remain proactive in offering remastered titles. We are also very happy with the major success we enjoyed with “NieR:Automata” in the fiscal year ended March 2018. The title had been launched in the fourth quarter of the fiscal year ended March 2017 but continued to see solid sales volume growth throughout the fiscal year ended March 2018, resulting in the development of a substantial franchise. Traditionally, consumer games have generated the majority of their lifetime sales in the first few months after their launches, but “NieR:Automata” actually saw significant growth after the initial few months post-launch, making it a revolutionary title from our perspective. Despite being a single-player title, the game has generated nearly 60% of its sales via digital downloads, which is an unusually high number. The fact that it continues to sell well even at present highlights its status as a title emblematic of the shift from the physical to the digital. The game was the second installment in the NieR series, coming seven years after the original. New players also loved it, and we feel that we have succeeded at establishing a new franchise for our Group. In the MMO (Massively Multiplayer Online game) sub-segment, we launched expansion packs for both “FINAL FANTASY XIV” and “DRAGON QUEST X” for the first time in two years in an endeavor to maintain and expand our paying subscriber base. Continuously adding new content is key to maintaining paying subscribers for online games, which tend to show marked attrition with the passage of time. The release of the expansion pack proved especially effective for “FINAL FANTASY XIV,” which, in defiance of the aforementioned tendency, achieved the highest paying subscriber count since its launch. The game itself has also garnered extremely positive feedback, and we saw the year as one in which it demonstrated its presence as a global MMORPG. Having been on the market for more than five years, both titles are long runners, but by rolling out new content on an ongoing basis, we will endeavor to create an even more robust service. 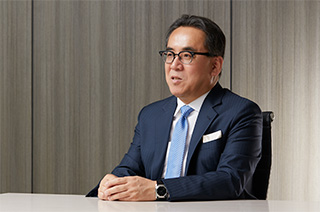 Net sales in our Games for Smart Devices/PC Browsers sub-segment came in slightly under the ¥100 billion mark, and the titles we released in the latter half of the fiscal year ended March 2018 delivered lackluster performances on the whole. As such, we saw the year as one that left us many issues to tackle. While maintaining and bolstering the percentage of our titles that prove successful is always a key challenge, we regret that many of the new titles released in the last fiscal year delivered very disappointing results. Common wisdom has it that Japan's gaming market has matured, making it difficult to generate new hits. Meanwhile, we view the new trend of Chinese and Korean developers and publishers creating hit titles to be one worthy of note. Our intention is always to pursue new and creative gaming experiences, and in the fiscal year ending March 2019, we will return to this basic philosophy, revisit our development and operation organizations, and strive to create new hit titles.

The release of fewer new game machine titles resulted in sales declining to ¥41.7 billion and operating income falling to ¥2.4 billion in the fiscal year ended March 2018. However, arcade operations were stable, and we were proactive in undertaking new initiatives, as exemplified by our renovation of the Mizonokuchi location of the Taito Station arcade outlets and our opening of the MEGARAGE arcade bar. With the number of brick-and-mortar stores continuing to decline, many prime retail properties that we traditionally would not have had access to are coming onto the market. We intend to capitalize on this opportunity and be proactive in opening new arcades to bolster our earnings. In the portion of the business dealing in amusement machine sales, we launched a newly reincarnated version of “DENSHA DE GO!!,” a train simulator game machine, as that title marked its twentieth anniversary. “DENSHA DE GO!!” is a key piece of IP (intellectual property) not only for TAITO CORPORATION but also for our Group. While the latest version has faced various challenges, it has been positively received by core fans, and we are currently exploring how we might go about further spreading its popularity. We hope you will look forward to what we have in store. In the fiscal year ending March 2019, we have launched a brand-new title, “Starwing Paradox.” Players have very high expectations for the title given the sheer size of the machine and the physical gaming experience it provides. The greatest appeal of arcade gaming is the realism it offers that cannot be gained from gaming at home. As such, we continue to see our arcades as a key piece of our Group’s gaming portfolio and intend to continue to take on new challenges in the Amusement Business Segment.

The Publication Business Segment posted net sales of ¥11 billion and operating income of ¥2.4 billion in the fiscal year ended March 2018. The shift to digital is pronounced in the Publication Business Segment, where we have come to generate more than 20% of our sales digitally. We look for that figure to increase further, and to accelerate the trend, we launched our MANGA UP! and GANGAN pixiv services in the fiscal year ended March 2017. By offering smartphone applications, we hope to create an environment that gives a broader base of readers easy access to manga and thereby tap new demand. The DAU (daily active users) figures for these smartphone applications have reached a sizeable level, and we are looking at them to develop into media that will underpin our Publications Business Segment. 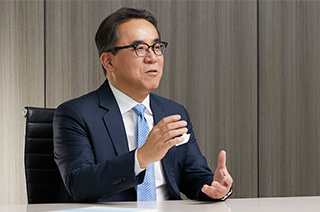 Additionally, in a new effort to bring manga to life using VR (virtual reality) technology, we have been working on an initiative we call “Project Hikari.” In May 2018, the project at last resulted in the launch of a product, “Tales of Wedding Rings VR,” a pilot endeavor that enables users to enter the world of manga via VR technology. Through initiatives such as this, we will continue to pursue new ways to depict the world of manga, thus adding further breadth to our Group’s content lineup.

The Merchandising Business Segment generated net sales of ¥7.5 billion and operating income of ¥1.8 billion. Earnings were helped by the variety of events we organized to commemorate the 30th anniversaries of our Group’s two major franchises, namely DRAGON QUEST in 2016 and FINAL FANTASY in 2017. Profits declined year on year due to increased advertising spending, but we are hopeful that these commemorative events have further strengthened our brand and will contribute to the development of the franchises. Moreover, following the opening of our first SQUARE ENIX CAFE in the fiscal year ended March 2017, we added locations in Osaka and Shanghai in the fiscal year ended March 2018. The cafes, which serve as a messaging platform for our content, have proven popular with customers. While we have no plans for additional openings at the moment, we see such brick-and-mortar locations as an effective shaper of our brand and are upbeat on future possibilities in this area.