While continuing to show strength in the market and serving as a pillar of our online earnings, eight years have passed since the service launch of our "FINAL FANTASY XI." The fiscal year ended March 31, 2010 was an interim year. For large scale MMORPGs, the fiscal year ending March 31, 2011 will include our launch of "FINAL FANTASY XIV."
At the same time, we have started to see our new initiatives bear fruit.
In order to successfully position our "SQUARE ENIX MEMBERS" as a net-based customer contact point for the entire Group, we began the full-fledged strengthening of this operation during the fiscal year under review. With over 1.5 million registered members worldwide, we have now reached a good starting point for business development.

Further, at SMILE-LAB Co., Ltd., a wholly-owned subsidiary established in February 2008, we have created a successful avatar-based casual portal site called "Nicotto Town." We felt this type of community service is a promising business area and that it would be difficult to generate such ideas from our current employees. Therefore, we created a separate entity independent from the Group in which all company staff came from the outside. Created in September 2008,"Nicotto Town" has successfully issued over 500,000 IDs, allowing SMILE-LAB to already reach profitability in the fiscal year ended March 2010.
In the increasingly important area of downloadable content,we are releasing over 50 downloadable titles for game consoles alone during the fiscal year under review.
We are also placing a priority on games for new devices such as smartphones. This has included, for example, game titles for iPhone/iPod touch like "CHAOS RINGS," "SPACE INVADERS INFINITY GENE," and "FINAL FANTASY," which each reached #1 in sales rankings on the App Store.
Additionally, we are making steady progress in the development of social network games.

However, the true impact of networks is not only on the content layer that I've described so far. There will be a structural transformation of business in which the very core of the ecosystem changes.

How will the distribution of the profit generated from the market change under a network centric model?
Put another way, what will happen to profits among the various market participants due to changes in media?
In the prior game media shift from mask ROM to CD, the benefits generated by improvements such as production cost savings and inventory risk reduction were shared by customers and software developers. As a result, profits at platform manufacturers improved and the entire industry grew.
So, what is happening this time? Cost savings resulting from the shift in media from discs to networks are mostly becoming the profits of network operators. Further, the reality is that customers are demanding price reduction in excess of the cost savings.
Without a successful network strategy, software developers will face structural difficulties in making profits.
On the other hand, these challenges are also accompanied by opportunities.
Through the use of a common infrastructure, it is possible for us to become a network operator or even a platform holder.
We plan to transform ourselves into a "community platform operator."
How will market growth change in a network-centric world?
In comparison with physical media, the pricing of networkbased content is clearly falling. This will be a negative factor for industry growth.
However, there will be a far greater positive boost from the wider geographic reach and larger potential customer-base offered by the very nature of networks.
Furthermore, we will be able to create a variety of new business models that were not possible in the packaged software business. In-game item sales are just one of the early examples of what is coming in the future.
This, therefore, represents a business chance for companies that are fast and flexible in business development.

The die is cast. We shall not refuse to face this reality.
By properly reading the trends in networking, we can utilize this torrent of changes to our advantage.

I would next like to discuss the importance of networking from another perspective.
That is, how are customer perceptions of value shifting?
A shift from hardware to software is one theme that has been around for a long time.
However, this represented only the starting point for further shifts in value.
We can learn more about the shift in value by looking at phases of the value shift for software. Within software, value was originally found in code, but later transitioned to data. This value flow can be seen using personal computers as an example. Value first shifted from PCs to application software. However, while application software such as spreadsheets was initially highly valued, commoditization of the application occurred and value shifted to the data used for input to the application.
The value found in data can be broken down further. In games, for example, game-play data (user-generated data) is becoming more important than the enormous amount of data for use in games (provided data). In Asian markets an example of this has been the emergence of games that are often distributed free of charge, creating business models that generate earnings from in-game item sales. Such new business models are examples of the value shift within software. Taking this a step further, the value of individual user data will likely be surpassed by community data.

The latter part of the shift is driven by network infrastructure.
The characteristic of "bit" data that allows perfect copies at no cost has created the destructive power of widespread diffusion.
However, because of this diffusive nature, "bit" data has lost its rarity value. On the other hand, with the emergence of user data and data shared among users, bit data can finally achieve rarity and value.
Earlier, I discussed our Group's transformation into a community platform operator.
By this, I mean that we are shifting from a creator of game data to a manager of individual and community data. 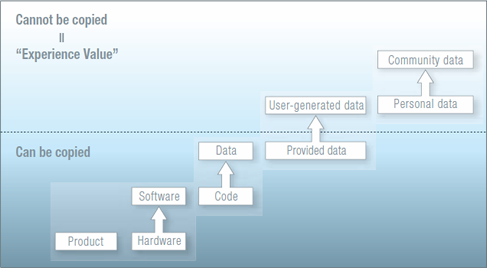