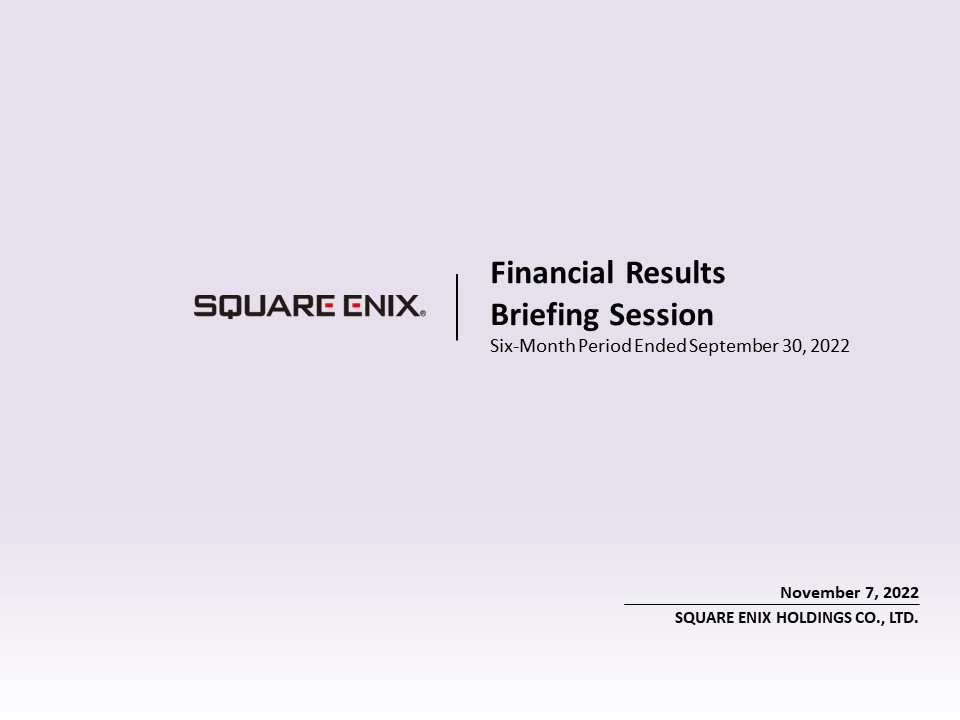 We would now like to begin the Financial Results Briefing session of SQUARE ENIX HOLDINGS (the “Company”) for the first half of the fiscal year ending March 31, 2023 (“1H FY2023/3”).Today’s presenters are:Yosuke Matsuda, President and Representative Director, andAtsushi Matsuda, Chief Accounting Officer. 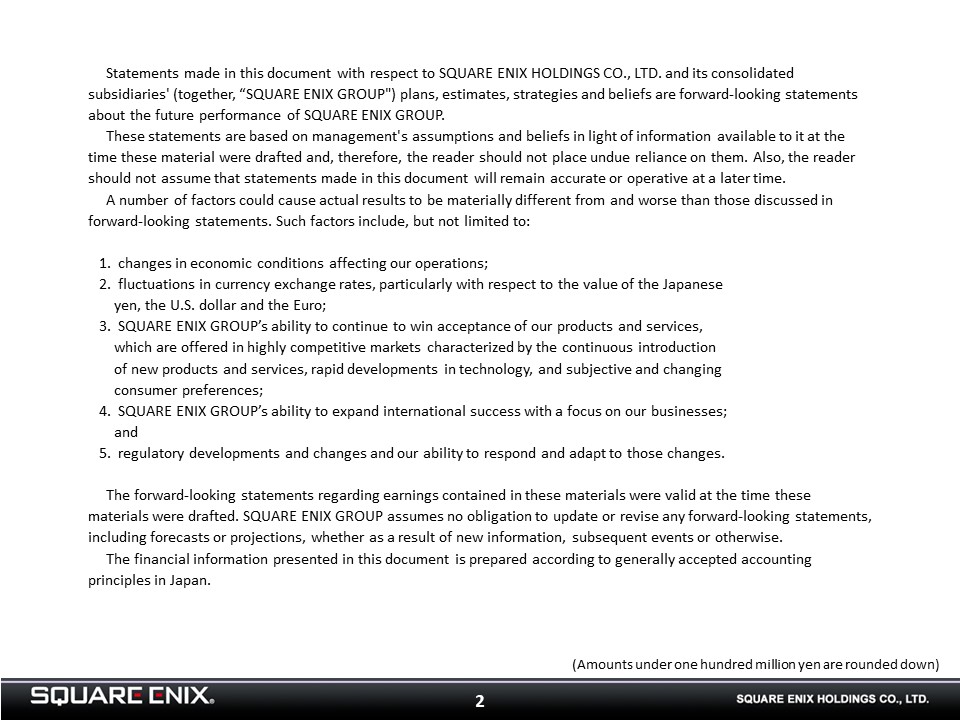 I am Atsushi Matsuda, the Chief Accounting Officer. I will be providing an overview of our 1H FY2023/3 results. 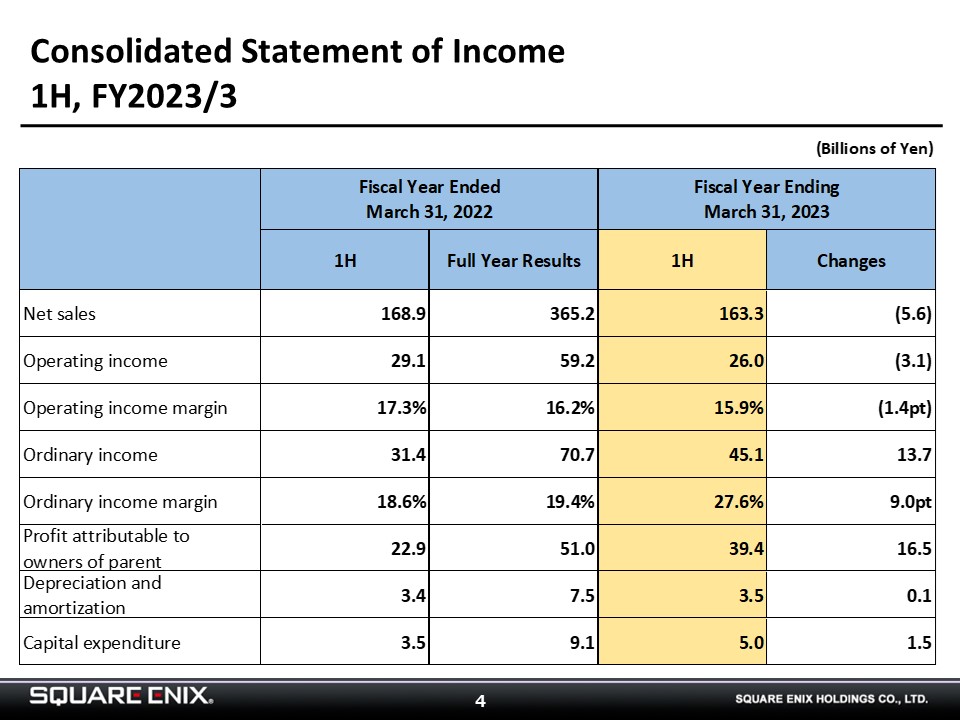 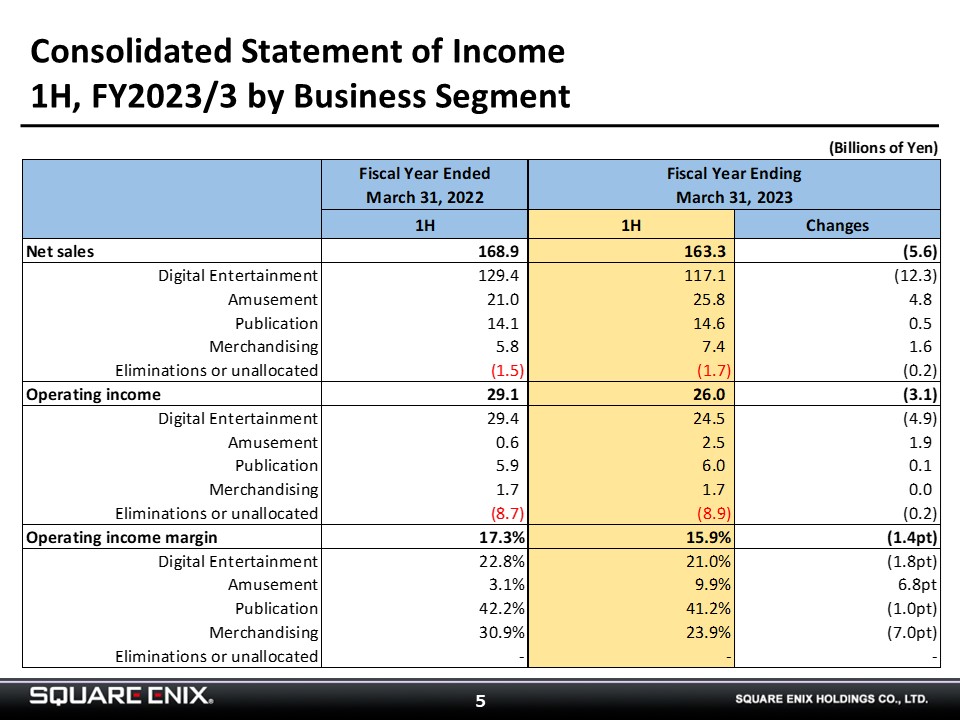 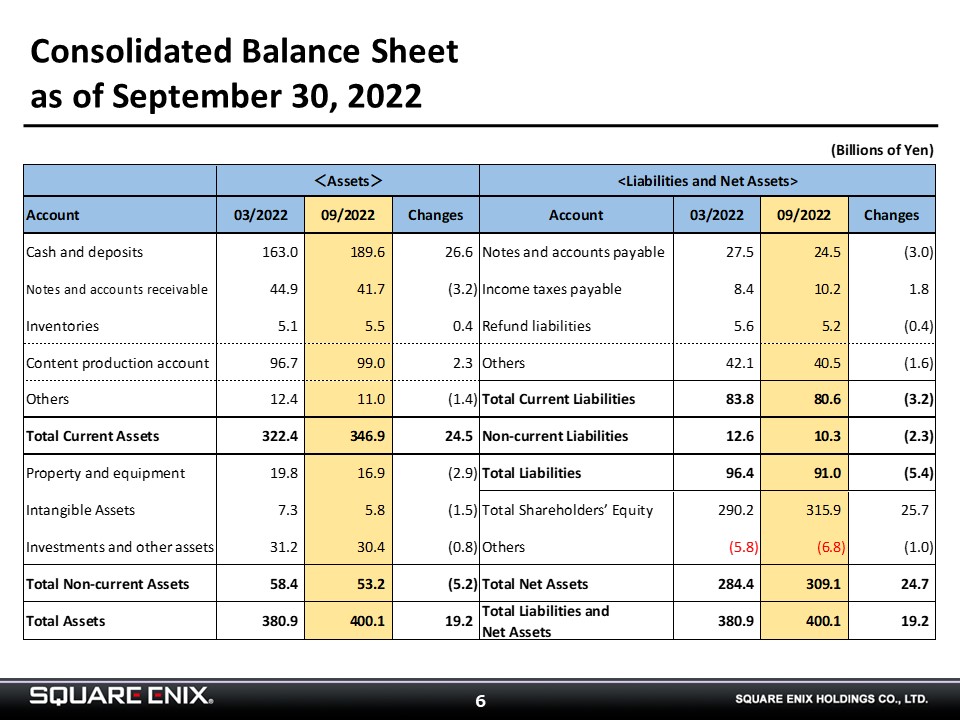 I will next break down our results by segment.The Digital Entertainment segment posted net sales of ¥117.1 billion (down ¥12.3 billion YoY) and operating income of ¥24.5 billion (down ¥4.9 billion).

Net sales declined YoY in the HD Games sub-segment despite the release of such titles as “LIVE A LIVE” and “DRAGON QUEST X OFFLINE,” as earnings from new titles were lower than in the same period of the previous fiscal year, which had seen the release of “OUTRIDERS” and “NieR Replicant ver.1.22474487139….”

Net sales rose YoY in the MMO sub-segment thanks to growth in monthly paying subscriber numbers for “FINAL FANTASY XIV.”

While “FULLMETAL ALCHEMIST MOBILE” got off to a strong start following its August launch in the Games for Smart Devices/PC Browser sub-segment, it was unable to fully offset weakness in existing titles, and the sub-segment’s net sales therefore declined YoY.

The Publication segment booked net sales of ¥14.6 billion (up ¥500 million YoY) and operating income of ¥6.0 billion (up ¥100 million). Sales and profits rose YoY thanks to growth in both digital and print sales, including strong sales of the major hit comic “My Dress-Up Darling.”

The Merchandising segment posted net sales of ¥7.4 billion (up ¥1.6 billion YoY) and operating income of ¥1.7 billion (down ¥21 million). Sales of new merchandise based on key IP were strong, but the sales mix changed, resulting in higher net sales but lower operating income than in the previous fiscal year.This concludes my overview of our 1H FY2023/3 financial results.

12345
The plans, forecasts, strategies and ideas described in this material are descriptions of forecasts of future results. These descriptions rely on information available as of the date of production of this material and are based on assumptions and judgment made by the Company’s management. Readers are advised not to rely solely on these forecasts. Readers should also not assume that these forecasts are accurate or valid information, even after the date of public release. There are many factors that may cause actual results to vary considerably from the forecasts, and in some cases actual results may be inferior to forecasts.
The information on the future forecasts described in this material is current as of November 7, 2022. The company is not obliged to update or correct forecasts concerning the Company’s future results, including forecasts or outlook, if new information becomes available and/or events occur after November 7, 2022.
laoding...